Prominent Queensland businessman and dual-code harness and galloping trainer, Ash Perks, has described Redcliffe Paceway as one of the most durable and best all-weather tracks in Australia.

Perks, who operates the Pelican Waters Resort on the Sunshine Coast with his family, said the rain was so strong at Redcliffe Paceway on Thursday night there were rivers of water running through the stalls and across the track.

“I just couldn’t believe how they could conduct a race meeting in those atrocious conditions, yet the track drained perfectly and the times were good. I doubt there are many tracks in Australia that could cope with what Redcliffe has endured this week, yet it has come through many saturated meetings this season, unscathed,” Perks said.

“The track team needs to be applauded. What a great job!” he added.

Redcliffe Harness Racing Club president, Bernie Ring, echoed those sentiments, saying he was proud of his ground staff, who worked in all conditions to have the track in peak condition this wet summer and autumn.

“The staff have done a wonderful job with all the weather we’ve had in last few months of racing. The track resurfacing two years ago plus the maintenance side of things has meant we can race in all conditions. That was very good foresight.

“It’s a different type of track, plus with 40 plus horses working on it every day, it’s not an easy job. I couldn’t be prouder of Mark (Belford) and his team,” Ring said.

The 54-year-old, Ash Perks, who moved with his family from South Australia to the Sunshine Coast 18 months ago, trained his second and third career winners at ’The Triangle’ last Thursday (May 12) and Sunday (May 8).

Those victories came via Letsplayuni – the 4-year-old gelding Perks owns and trains at Wamuran.

The son of Western Terror won race four on Sunday by six metres with a 1:58.4-mile rate. He repeated the dose in race three on Thursday winning by a neck in 1:59 even. He opened up paying $4.60 and $2.70 respectively.

Leonard Cain did the driving on both nights. Letsplayuni has now won six of his 27 starts and placed in one other for $23,213.

The black gelding provided Perks with his first training success at Redcliffe Paceway on January 24, when he and Angus Garrard won by a head as the $3.10 favourite. His mile rate that night was a personal best 1:58.1.

Perks only took out his training licence this season and has now had 13 starters for three wins and one placing. The Perks trained Bettor Keep Rocking and Garrard finished a half-head second in race two at last Sunday’s meeting.

“I’m working three horses on Terry & Del Hancock’s property at Wamuran. Our business is based near Caloundra so it all works in well.

“Terry’s track copped a bucket of rain this week, and even though he’s come through the race well. I might give this fella (Letsplayuni) a week off. He’s a done a very good job for me. All three wins have been special,” the 54-year-old said.

Sydney trainer, KerryAnn Morris, won three races when she had him from his debut fifth on June 16, 2020, until November 2021.

He said Stu Valentine helped him set up on the Sunshine Coast before Hancock set him on his way.

“Stu helped me get horses over from New Zealand and Greg Franklin was the first local trainer to show me the ropes and Terry has allowed me to grow my team on his beautiful property,” said Perks, who also trains three gallopers with Cranbourne trainer Nathan Dunn, including the highly promising 3-year-old, Corona Lad.

Born and educated in Adelaide, Perks owns and operates 3 hotels in SA, whilst he and his family are heavily invested in the Pelican Waters Resort on the Sunshine Coast.

“We (Pelican Waters Resort) sponsor the mile rates at both Redcliffe Paceway and Albion Park. Racing has always been a big part of my life and when Stu Valentine met with Chris Barsby with the suggestion of sponsoring mile rates, we were all in on the idea.

“We love it up here. My son Calvin has his stable hand license and is really keen on the horses, so it’s a bit of a family affair. My wife Liza and our other kids Sinead and Hudson wish we moved here 10 years ago. We are here to stay. We love Queensland and what is has to offer” said Perks.

For the record: Perks silks are teal with a black and white band, and armband.

Letsplayuni’s three wins…The top one was recorded last Thursday (May 12); the middle one was last Sunday (May 15); and the bottom photo is of the winning connections after Letsplayuni’s victory, and the first Ash Perks training success at Redcliffe Paceway on January 24. The latter photo was taken by Dan Costello. 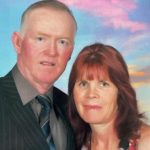 Betts family has a Friday to remember