Redcliffe Harness Racing Club president, Bernie Ring, will be the first to tell you it’s been a difficult two-years with Covid-19, but he insists the killer disease will not stop the Club’s direction and progress.

He said the club’s 2020 Winter Carnival copped the worst of Covid-19.

“It was an especially difficult time with very little patrons on course, but like always, the racing throughout this and last season has been very good,” Ring (pictured above) said.

“The club is progressing along well. Last season’s tax relief was just the shot in the arm we needed. We were also offered extra meetings, which we would never ever knock back. Thanks to Racing Queensland, we are now well ahead of where we were in pre-Covid 2019.

“The biggest praise should however go to our extremely hard-working committee, who have all played a big role in what is happening at ‘The Paceway’,” Ring said,

“Racing Queensland and our committee ensured the turnaround,” Ring stressed.

Ring, who has worked with Queensland Rail for 36 years and is also a prominent Friday night DJ for Radio Bridge 99.7FM, said the Club had rigorously followed deadlines set by both the Government and Racing Queensland.

“We did everything we were told to do, and some. The participants have been great in their understanding of checking in and temperature testing. They understand the ramifications if something happens.

“We have a Committee person on the gate (Daryl Kerr), who has been there since it started. We also have a security guard on other gate so people can check in on their way in,” Narangba-based Ring said.

The 54-year-old said renovations to the club’s restaurant were progressing well and should be finished in next two weeks.

“With our renovations going ahead, it’s now given people somewhere to go and somewhere to dine on a Wednesday night,” he said,

The president said he was proud of the official opening of several facilities at ‘The Paceway’ last September. He said a $274,000 Government grant had ensured a new stabling complex, new toilet blocks, and the upgrading of male/female and stewards’ rooms at the track affectionately dubbed ‘The Triangle.’

“As everyone knows we are a progressive club and I think everyone that came to that opening appreciated that. This was all funded through the Luke Howarth Government (Federal Member for Petrie), and for that we are extremely grateful,” Ring said.

Those developments come a year after Redcliffe Paceway’s unique 833-metre track with the three bends, underwent a $300,000 refurbishment. That was the first time the track has been resurfaced in 10 years.

“The old surface was clay, and it had a tendency to move. We now have the same crusher dust as Albion Park and we know the times that have been produced on the track,” Ring said.

He said the track was “on fire” thanks to Mark Belford and his staff.

“The track is resurfaced twice a year to help the maintenance of it. It seems to be getting faster and faster. It’s not only a unique track, but it’s also fast,” said Ring.

Those comments were endorsed with five track records (all pacers) being broken during the Covid19 era. They came via:

He said described Trot Rods 2021 as one of the most significant events run at ‘The Triangle’ in 2021.

“It was only the second year we staged the Sprint Series, and it was raised to another level with the winning trainer (Chantal Turpin) getting a 2HAL Tuza Float thanks to Adam Crocker’s 63.8 record victory.

“The Winter Carnival, which started on June 18, has also been a season highlight.

“The Patrons Purse Won by LL Cool J, while the 3-year-old Yearling Sale race was won by She’s Miss Divine.

“Our Saturday June 26 meeting was our signature night with quality racing throughout the card. The Group One $100,000 2yo Sales race was won by Teddy Disco; and She’s Miss Devine nailed the Oaks.

“The Redcliffe Cup was taken out by LL Cool J, while Big Gem Montana won the Showcase Final. Godofthunder triumphed in the Redcliffe Trotters Cup, while Kiwi visitor Krug was breath-taking to watch as he easily won our Derby,” Ring said.

When referring to his club’s Yearling Sales policy of a gold coin reserve, Ring said:

“Where else can u buy a standardbred for a dollar?”

Ring was re-elected to the presidency just when Covid hit in December 2019.

His time at the helm has been a very positive time in the club’s 50-plus year history.

“We’ve got a new track surface, we’ve got an established Group One race here now; we have modern facilities, and our annual Yearling Sales are getting stronger each year.

“We are doing okay financially too. I love the job as president, because the committee makes the job both fun and easy. They are very hard-working and we all get along well. We all have the one goal of making harness racing better than what it has been,” Ring said.

Ring said he would like to stay on as President of the Redcliffe HRC for the maximum seven-year term.

“We are a go-ahead committee always seeking new ideas and ways to get people on track. Watch this space. Hopefully there will be more incentives and initiatives like this in forth-coming seasons, Ideas are in the pipe-line,” Ring said.

“I’d especially like to thank our treasurer, Reg Vidler, who is always there to help, especially on Wednesday night’s if I can’t make the Members Draw,” he added. 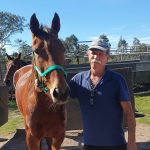 Warren Hinze is bringing the best out of Whata Reactor 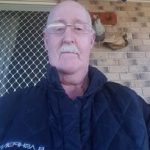 Kick in the head not enough to stop Colin Knox