The Cobbitty trainer racked up his 200th win of the season at ‘The Creek’ when Cruz (pictured) won the Garrards’ Horse & Hound Open Pace (Race 3).

The 200 is a personal best. He achieved his double ton from 740 starts and is currently fourth on the national training premiership – 68 wins behind Queensland’s Grant Dixon (three winners Saturday).

The Cross stable has produced 11 winners at the last five Saturday meetings at Albion Park, with the undoubted highlight being Cruz’s four-metre victory over Queensland’s current Horse-of-the-Year, Colt Thirty One, in the Wondais Open on July 11.

Driver, Leonard Cain reckons he could have gone faster if pressed.

“Cruz felt awesome that night and just done it all in second gear,” Cain said.

Up until July 11 the Albion Park track record was held by Im Themightyquinn in the 2014 Sunshine Sprint.

Last night Cruz (6) and Chris Geary trailed Maywyns Best for most of the 1,660m mobile and then pounced late to beat him by 1.8m. Cruz was the $1.30 favourite.

“The 200 wins is an amazing achievement and a credit to Craig and Luke (McCartyhy) and all the team at Cobbitty Equine.

“Praise must also go to Matt Coffee who’s doing a super job with the horses here in Queensland. My job is only small compared to what he’s doing day in day out up here. I’m just so thankful to be a small part of it,” said driver, Geary.

Cruz went under the magic 1:50 mark at Tabcorp Park Menangle on March 21 this year.

That evening he and Todd McCarthy paced a 1:49.9 mile rate when defeating Expressionist and Fouroeight in the Menangle Country Club Open Pace.

Cross’s 11 victories at the last five Saturday night meetings at Albion Park have been:

July 11: The Leonard Cain driven Culture King, Cruz, and Roll One Over. 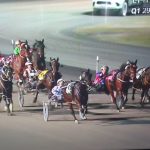 ‘Leader Peter’ can almost taste the victory he so deserves 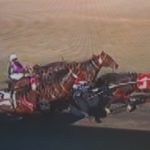