The man who has driven a century of winners 11 times notched up his 182nd victory for the season at Redcliffe Paceway yesterday (Wednesday). It’s the fifth time in six years he had achieved the ton.

Then on July 11 this year at Albion Park, McMullen became the youngest reinsman to drive 2,000 winners, and in doing so joined 26 other drivers to do so.

In fact the 28-year-old Patrick Estate reinsman said it would be the highlight of his career if he achieved that feat for the first time on August 31.

He said it would mean more to him than winning his only Group One victory behind My Valerie in the 2015 DJA Memorial Trotting Championship at Albion Park.

“I’ve tried for so long and come so close, but never quite got over the line. Because of the wait a Queensland premiership title would undoubtedly be the highlight of my career. It would be very special,” McMullen said.

In June McMullen became the first Queensland driver to go past $1 million in earnings.

But as at this morning (Wednesday) the father-of-two led the Queensland Driving Premiership with 182 wins. He has also placed 303 times and banked $1.3m in purses.

“Ten seasons I’ve waited and so many times I’ve gone close – and nothing is guaranteed this season either. But if I can carry on with what I’ve done these last three or four months I’ll be happy.

“If I did win it, it would surpass anything else I’ve achieved in the sport, including reaching the 2,000-win mark, which I’ll probably get to next season (currently 1,921),” he added.

Being a father is even more important to the former Lowood State High School student.

“Obviously Chantal, Rylee and Olivia are my life and that’s where my priority is. The drives are drying up a bit. I didn’t have any at Redcliffe this week, and that’s okay because I can spend more time with my girls and at our barn,” McMullen said.

McMullen sat in the one-one with the Roll With Joe – Trudee (Albert Albert) gelding before looming up on the turn and then running away to win by an increasing 5.1 metres.

The bay is owned by Craig Whiteoak and was bred by Jared Kahlefeldt. It was his second win in 13 starts. He’s also placed four times and banked $10,849. He made his debut at Albion Park in January.

Gojoe was the $3 second favourite. 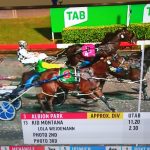 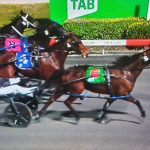