The horse with the dodgy legs that would have ended up in an abattoir had it not been for Cassals Racing has won his third straight race.

Somebeachsomegift nailed his hat-trick at Redcliffe Paceway tonight (Wednesday) thanks to a brilliant drive from trainer Al Barnes’ son, Hayden.

Barnes’ had the son of Somebeachsomewhere three-back on the outside early before they landed up in the one-one at the bell.

Barnes then bided his time, sitting pretty, before peeling three-wide at the 500m. The duo led into the straight and at the finish had 6.4m to spare of their seven opponents.

More about the gutsy 6-year-old and the brilliance of Cassals Racing can be viewed below (www.cassalsracing.com). Note the website is still in its development stages.

One of Queensland’s most likeable and talented reinsman, Paul Diebert, who works for the Grant Dixon stable at Mount Tambourine, notched up his 500th career win at Marburg on Sunday.

The talented 25-year-old achieved his milestone in the last event (race 9) behind the Mark Rees trained Ale Ale Kai.

“You caught me by surprise. I was unaware. I just go out and drive like it’s my first race. I just like driving winners doesn’t matter where. Five hundred was initially my lifetime goal when I started out with Glenn and Darryl Douglas in Victoria

“I’ve had the opportunity to drive for some great leading stables over the years, including Eric Anderson, and now Grant Dixon. I wouldn’t be where I am today without their help.”

Former Kiwi junior driver and now Fernvale-based Trent Lethaby trained his first winner at Marburg on Sunday thanks to a lovely drive by Taleah McMullen in race eight.

Here’s what Lethaby had to say about his maiden win:

“I’ve owned a few winners but it’s good to get one in my name. He is the only one I have in work. I worked for Grant Dixon for nine months and been with Stephanie Graham for about three. I like it here, and at this stage I’m here to stay,” he said.

Here’s a story I wrote about Lethaby’s first driving win back in October 2015:  http://www.harnessbred.com/lethaby-secures-first-winner/

“I don’t drive much. That was my seventh winner I think and my third at Albion Park. I’ve driven a winner there every trip we’ve made up here for the winter,” NSW-based Nikki Pagan said.

The 33-year-old horsewoman was referring to 7-year-old entire, Blackwhiteandblue, who won the fifth race at Albion Park yesterday (Tuesday).

“We love coming up here for a trip with the horses during the winter and it was great to win yesterday on this horse. It was his first win for us as we recently purchased him from Neil Day with the aim to bring him up to Queensland.

“He’s a very nice horse Rickie Alchin (trainer) and I both really like him,” Pagan said. 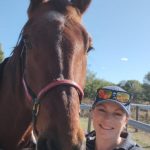 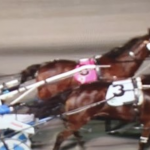 HOW GOOD IS HE! GARRARD RACKS UP WIN 100