A 6-year-old gelding who was just days from being slaughtered at a loc­­al abattoir ­­­­­back in 2017 will be looking for his third straight win at Redcliffe Paceway on Wednesday at 6.22pm.

The couple live in Tallegalla, which is some 1,450km from the Echuca Saleyards where Somebeachsomegift was being offered up for sale.

The Somebeachsomewhere bay gelding was suffering from tendon and stifle issues at the time, but there were more to his injuries than met the eye.

“I was browsing over an Echuca Saleyards catalogue that Cassie Saunders had obtained. There was a well-bred thoroughbred mare being offered for sale and Cassie was interested in it,” Barnes said.

“Somebeachsomegift caught my eye. He had only raced 11 times and won a Group Two race ($50,000 Southern Cross 3yo Final) at Globe Derby Park in 2017. He only raced once more (sixth) before he was sent to that Echuca Sale.

“If we hadn’t bought him, he would have been history by now. I think he was destined for the slaughterhouse but our $580 bid saved him,” Barnes said.

“Then we had to pay another $1,000 or so to have him re-registered after he was de-registered from racing.

“That took ages to sort out. I had Harness Racing Victoria helping me and the stewards were terrific, along with the Harness Racing Authority. My parents Geoff and Lorraine, with a close family friend, played a big role in sorting it all out. Their work behind the scenes was awesome and greatly appreciated,” 47-year-old Barnes said.

He said he initially made a few phone calls about Somebeachsomegift, and was told the horse had broken down and had been all but been retired from racing.

“I contacted a few people and a girl I spoke to, who had a fair bit to do with him, was quite upset that she was told he was at the saleyards. Apparently, she was in the middle of moving house and had nowhere to put him.

“I promised her I’d rescue the horse and get him up to our place. It was in my mind I might be able to get him back to the races, because over the years we’ve done pretty well at patching up horses with bad legs,” said Barnes.

“I was confident with time and patience I could patch him up and told the girl that when I was finished racing him, she could have him back,” he added’

Barnes said after navigating the logistics of purchasing Somebeachsomegift and having him transported north to Queensland, the horse had a surprise for his new owners.

“He turned out to be one of the easiest horses to fix up that I’ve ever had. Then after almost three years he was back at the races. That in itself was quite an achievement. He took a wee while to warm to his task, and now he’s placed three times and won his last two starts (from nine starts) quite easily. To say that we are quite proud of him is an understatement,” Barnes said.

After having his last race at Globe Derby Park on August 12, 2017 Somebeachsomegift resumed his racing career with a seventh at Albion Park on May 15.

Then on June 25, Somebeachsomegift and Adam Sanderson won an R42-48 Pace by 3.6m, before he and Hayden Barnes repeated the dose by a whopping 15 metres at Redcliffe Paceway on July 2. He was the $2.40 favourite.

“I think he can go close again on Wednesday. He has the draw (race three, number 2), and he just seems to be getting better and stronger with each race. You have to remember he’s only had 20 lifetime starts now for six wins and six placings, so as long as he stays sound there should be a heap of racing left in him yet.

“I think we will see a few more wins out of him. He’s just a great ‘feel good story’. We got there in the end and he’s now rewarding us.

“He’s as sound as a bell now, and should keep racing consistently. I’m just elated because later on when he’s finished racing, the horse will also end up having another nice home,” Barnes said.

Alistair and Cassie prepare a team of pacers at their base near Marburg, about 60km from Brisbane. Their stable star is the 13-win ($190,451) last-start Redcliffe Gold Cup runner-up Northview Hustler.

More New Zealand imports, like Northview Hustler, are expected to venture to their barn in the near future from Lincoln Farms in Pukekohe, South Auckland.

“We have built up a close association with John Street and his team at Lincoln Farms. He is one of the biggest owners in New Zealand and Cassie and I are so proud to be able to work alongside him,” said Barnes. 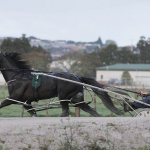 ‘THE HUSTLER’ LOOKS TO BOUNCE BACK IN REDCLIFFE CUP 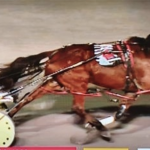 SOMEBEACHSOMEGIFT NAILS THE HAT-TRICK and OTHER HARNESS NEWS