The 3-year-old brown gelding named after this writer by brilliant race-caller Mark McNamara, has won first-up in Australia.

He was named Ranger Bomb simply because I made a point of always being first to the post-race interviews in New Zealand – and “apparently” bombed the odd photo or two. I’m no bomber, simply like to get there first – just like Ranger Bomb did today.

The former Mark Jones trained pacer left New Zealand on July 29 the winner of two of his 12 starts. He also placed in five others since making his debut sixth at Addington Raceway on July 6 last year.

Today at 4.17pm, Ranger Bomb drew seven and then mooched around to the lead after 400m. Trainer/driver McCarthy then controlled the race to win easily with a 1:52.6 mile rate.

McNamara and Cavalla Bloodstock Limited did the breeding.

The favourite paid $1.60 in Queensland to win. 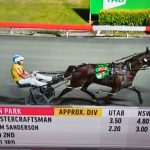 Sanderson adds to his best season with a century of wins

Meet the Ekka prodigy who became a Redcliffe legend