“Worry is a rehearsal for failure!”

How pertinent those six words are for anyone living in the Covid19 era, but more so for the General Manager of the RACQ Bank here in Queensland.

Not only does Brad Steele have more than 300 staff working for him throughout the Sunshine State, but he’s also an Albion Park committee man, who is obsessed with making things right in what he has termed his second chance in life.

The 57-year-old should really be with his grandparents in heaven right now, but his faith and a strong will to live, has seen him come through the other side, and even more determined to maximise the gift of life he has been given.

“I have an even greater zest for life now and few things excite me more than harness racing. I’m very passionate about the sport and that’s why I made myself available to go on the Albion Park Board after my cancer scare last year. Harness racing has played a big part in our family’s life for a long time,” said Steele, a proud country boy raised in Winton (15 hours north-west of Brisbane) – the town where both Qantas and the anthem Waltzing Matilda originated.

In November 2018 Steele was diagnosed with stage 4 inoperable cancer. He ultimately underwent a 17-hour operation, spent five weeks in hospital, and was on chemotherapy and radiation treatment for over six months.

“I have a new respect for life. I’m here to make every day count. My faith played a big part in my recovery and now I want to do the very best by my family, work, and harness racing.

“We need to hear less about administrators and more about industry. it’s the breeders, owners, drivers, punters and trainers we want to hear about and elevate.

“I don’t think all administrators get that. We are here to promote our sport, not individuals on committees,” Steele stressed.

“We need more innovation and less administration,” he added.

Steele kind of knows. He regularly addresses large banking crowds and has goals, targets and visions that he must achieve.

“I’m no stranger to racing administration either, and I believe I can make a difference again one day.

“My youngest brother, Scott, is the General Manager at Albion Park and we work closely with each other and fair to say we regularly have a difference of opinion which is healthy.

“You can’t beat passion and relentless drive, and that’s something I certainly have. Probably more so after the cancer scare, but harness racing isn’t an easy fix. We have issues and opportunities to get on top of,” he said.

He believed Queensland boasted the most dynamic harness racing in Australia.

“The last thing I personally want is for Racing to move away from Albion Park to a new and more distant location. If we want to attract the Interdominion here in three years we have to rebuild, refurbish and bring the raceway up to the best world class harness and entertainment facility.

“If we move it will take five or more years. It’s been proven in other cities that relocating from downtown to rural areas hasn’t necessarily worked. We have everything we need at Albion Park. It just needs to undergo major changes,” said Steele.

He said it was his goal to get people back on track, and it was paramount that clubs did more here.

“There has to be innovation and incentive to get them off the couches at home. Sure, a champion horse will do that, but we are not doing enough to get people to the track.

“We also have to win back owners who live in Queensland but race horses interstate. That is why we need to further elevate our trainers and drivers not administrators.”

Steele believed there was a layer of enterprise missing in Queensland harness racing.

“We need more innovation and less administration in our breeding industry compared to the gallops. If you buy a black type 3yo colt thoroughbred it can end up being worth $20 million, but in harness racing if a standardbred achieved the same heights he’d be lucky to fetch $1 million,” Steele said.

But Steele gave credit where credit was due.

“I want to thank the Mini Trot Mums and Dads who are fostering our stars of tomorrow. Without them there are not drivers of tomorrow.

“The Mini Trotters have produced some real stars over the years like the youngest driver ever to win 2,000 races, aka Peter McMullen. His wife Chantal (Turpin) and rising star Angus Garrard all went through Mini Trotting.

“There are others too like Nathan Dawson etcetera. We have so many positive aspects in our game here. Take Chris Barsby for example

“He’s easily the number one harness caller in Australia. That is a huge plus for harness racing in this State,” said Steele.

Steele was educated by the nuns at Winton Convent School and did his secondary schooling at Aramac State and Redcliffe High Schools.

“I was raised in the country and my father Billy was a bush bookmaker. In fact, the bar under the main grandstand at Redcliffe Paceway is named after him.

“I’m the oldest of three boys. Nicky and Scott have owned standardbreds over the years as well. I think that’s why we all love horses and animals so much,” Steele said.

Steele has owned many horses over the years. His first horse – Gotham City won several trials but never fired on the racetrack.

“That goes back about 35 years. I’ve also owned 2008 Redcliffe Horse-of-the-Year, Voodoo Lounge, and a good one called Cobbitty Classic who ran second in the New Zealand Cup.

Steele is married to Nikki, who used to work at Albion Park as the club book-keeper many years ago. 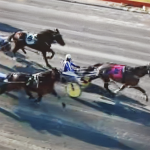 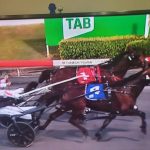 Déjà vu for Cain & Cross at ‘The Creek’