If Nathan Dawson is the driving master of the Dawson family, then older brother Mitchell, is certainly the training whiz at the Glamorgan Vale-based family farm.

The 27-year-old horseman has really stepped up to the plate, especially since his father, Glenn, took a back seat several seasons ago to allow his oldest son to take over the running of the stable.

Just over $3,000 of that went to Ross Shaw on Wednesday night – the owner of Dawson’s latest winner – the 5-year-old son of Lanercost, Lanoch Boy.

Matt Elkins sat in the trail with the bay gelding before letting him lose on the home turn. They won race one at Redcliffe Paceway by an increasing 7.9 metres – with a personal best 1:57.3 mile rate.

Dawson was delighted with the drive and winning time.

“Matt had him perfectly situated in the trail, and from there I thought he might be hard to beat because he has been working well.

“I’ve had his since his first race back in October 2019. He’s won five races now. He last won in December at Redcliffe, and has gone alright since without much luck. On Wednesday luck went his way and he was bolting in the trail,” Dawson said.

“He’s quite a nice pacer, but not the best I’ve trained,” he added.

Born in Ipswich and educated at Lowood State High School, Dawson is the oldest of three boys to Glenn and Wynetta. Nathan is 26 and Ryan is a welding inspector.

Since leaving school Dawson (Mitchell) has trained at least one winner per season from 2013 to 2022. In fact, it’s usually six or more with 2018-2019 his personal best when landing 24 winners from 211 starters.

Although Dawson is primarily a trainer these days, he drove his first winner at his first race-day drive behind Maverick Jack at Marburg on July 28, 2012.

“I just want to excel in training. That’s what I enjoy best. I love being around the horses,” said Dawson, who works a team of four in the Somerset region.

“I have my brother and other good drivers like Matt to call on if I need them. I get a big thrill out of breaking in horses and then developing them into race winners,” Dawson said.

Dawson’s first training success came at Redcliffe Paceway on May 31, 2014 behind Hashtagyolo – an Art Major mare, he also drove that day.

“I am very proud of what all three of my boys have achieved. They all work very hard and make their parents proud. Nathan comes and helps Mitchell a bit and Glenn is there in there in the background.

“I’m just so happy the three of them are doing what they love. I’m especially proud of Mitchell this week because he works do hard caring for his horses.

“He’s a very astute horseman and has really done a brilliant job since Glenn stepped back a bit,” Wynetta said.

“Dad (Ron Knack) has also been a big help. He often takes the horses to the races, so as you can see it’s a family operation,” she added.

Some of the best Dawson trainees over the years have been:

Footnote: Lanoch Boy will line up again in race three (from gate five) at 6.53pm on Wednesday night. Little brother, Nathan will do the driving.

For The Record: Dawson’s training colours are blue and white stripes, blue yoke, white diamonds and sleeves, and blue armbands. 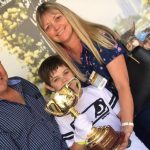 Sharon Furey – horsewoman through and through