“She doesn’t like me. She knows I’m there. She prefers others to drive her, and that’s why Nathan (Dawson) does the steering. I think she likes everyone, but me,” the 55-year-old hobby horseman joked.

She is the only foal out of the 2010 Cold Mountain Stud-bred Camelot Hall – Madame Montcalm (by Flight Of Fire) maiden mare, Madame Camelot.

“I’ve always liked her and she’s really started to put it together this season. Eight of her nine wins have come this season. She used to be a nervous little horse, but she seems to have outgrown that now.

“She’s not very big, but she’s a very well put together mare. It would be silly not to breed from her mother this season,” Towns said.

“I’m not sure who she will go to yet, but she crosses well with Lombo Pocket Watch and Million Dollar Cam,” he added.

Towns has now recorded eight training wins in 2021. That takes his career tally to 34 victories since he first took out his training licence in July 2010.

Towns has also started driving this season, having sat in the sulky seven times since July 10, 2020.

“I’ve always like to set myself challenges in life, and I always wanted to drive in all the years I’ve been involved. I took the plunge and decided to get my licence this year. I’ve driven at the trials, and now I can say I’ve driven on race-day. I’m not super keen, but I would like to salute the judge one day,” Towns said.

He and Littledee drew eight in the NR30-40 Pace, and they were three-back and two-out at the bell, and then the one-one just before swinging for home.

In the lane Dawson swung the brown mare three-wide, and she ran away to win by an increasing 12.7 metres.

“I think she started to turn the corner the start before her previous one. She normally struggles a bit at Redcliffe and I thought Albion Park was a better track for her, but she raced well there the other night.

“She’s really starting to adapt and her gait is a lot cleaner now. She only finished fifth (in race six) at Albion Park last night (Saturday), but Shane (Graham) said she came home real well.

“Her stablemate finished seventh in that race,” Said Towns.

They are the only two pacers that Towns has in work.

“Wheres Tascott used to be the smarter of the two, but Littledee’s now right up there with her, now that’s she’s improved a lot. Littledee might even be up there with Elzboy as the best I’ve trained.

“He won 13 races and also provided me with my proudest moment in the sport when he won at Marburg as a 2-year-old.

“He was also the very first horse I bred to win. He was the second last foal out of the eight-win (1995 Digger Almahurst) mare, Bold Sapphire.”

Towns loves Marburg. He’s a former Club president, and has been a volunteer at the track since he got more involved in harness racing just on a dozen years ago.

“I really like the country atmosphere, and I also enjoy coming to Redcliffe. The harness racing people are a friendly bunch of people. The Redcliffe Club, like Marburg, has the industry participants interests at heart,” Towns said.

Despite being born and educated in Tasmania, you can blame Western Australia racing legend Fred Kersley and his nephew, Brian.

“I used to play Aussie Rules Under-21 for Armadale with Brian in Western Australia, and then when we met again in Perth, I didn’t even realise who he was related the enormity of what Fred had achieved.

“Dad (Wayne) was a timber man and transport and that’s how we ended up in Perth. He wanted something different and we ended up in Queensland in 1987,” Towns said.

Towns followed his father into the transport industry and for the last 31 years he has been a supervisor at Star Truck Express in Darra.

“Before long I was jogging horses and then I became hooked. I owned my first winner via a claimer named Gold Tricks, who won for us Victoria in the mid-2000s,” he said.

Towns, who is nicknamed ‘Diesel’, is from Patersonia in Tasmania. He was educated at Queechy High School in Launceston, Tasmania

“I don’t have any kids but Maxine does the job of several. She is the rock of our barn, and is right into harness racing. She keeps me enthused.

“Maxine is also a very astute horsewoman and I’m lucky to have her helping me. She grooms the horses brilliantly and does untold hours jogging them. I’m extremely grateful to her, because she educated me. Littledee’s win was our win,” Towns said.

Towns said he was likely to line Littledee up again this Friday at Albion Park, or two days later at Marburg. 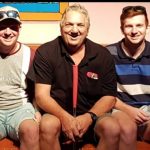