The brilliant son of Cammibest and Fifth And Broadway (by Western Terror), sat parked for much of the 2,138m mobile, and then landed the one-one down the back straight.

Trainer-driver, Grant Dixon, then got the most out of the 3-year-old brown colt in the lane, stretching out to win by two metres and 3.5m from Will The Wizard (12) and Blacksadance (10).

Retired Brisbane GP, Dr John Mammino, paid $18,000 to breeders, Burwood Stud, for Governor Jujon at the 2018 Redcliffe Yearling Sales. He has owned hundreds of standardbreds since 1978, but none better than Governor Jujon.

His pride and joy has now won one Group One event, three Group Twos, and a Group Three. His career record sits at 20 starts, 15 wins, three seconds, and just under $300,000 in stakes. This season he has won 10 of his 14 starts and ran second in two others. 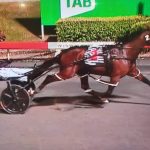 Five races down… and another hat-trick for Cross and Cain 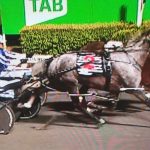