Another brilliant front-running drive behind $1.60 favourite, Roll One Over (1), has ensured three wins from the first four races at Albion Park for brilliant young driver, Leonard Cain.

Roll One Over, who is by Rocknroll Hanover, simply had too much gas for his nine opponents, winning the fourth event by five metres.

He is owned by H. Shea and Summit Bloodstock and was bred by C.J. Maggs and D. Jack. 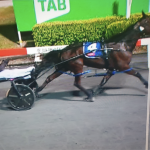 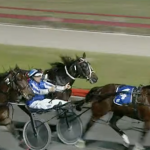